Adding a Feature to an Existing App 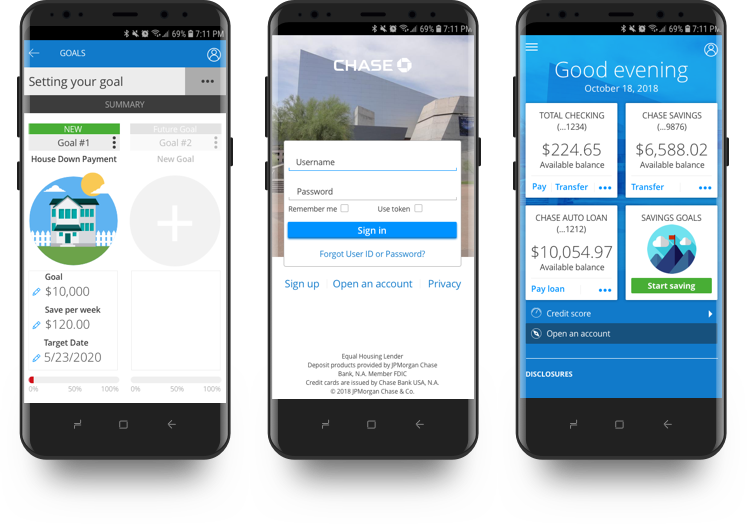 Chase, owned by JP Morgan, has put a lot of effort in the past providing the most relevant products for their customers. Now, they are looking to offer tools to help customers manage their money better. To do this, Chase is looking to create a new personal finance management tool to be integrated with the existing app.

This feature is aimed primarily at Millennials. According to research, their future is still being impacted by the Great Recession, affecting their attitude toward money and investing. Many worry they will not be able to save for a house, pay off student loan debt, or save for retirement. Chase sees this as a unique opportunity to help them with their many financial challenges.

I consulted my notes from the interviews and was able to develop the type of persona who would use the new savings goal feature in the Chase app. Based on my research and interviews it became clear that this group, the Millennials, needed help in saving money. Gabriel is based on the people I spoke to and the struggles they have with saving for the future. He was created to help bring that struggle to light and make the journey to saving money more relatable. Here, we really begin to get a sense of who Gabriel is. 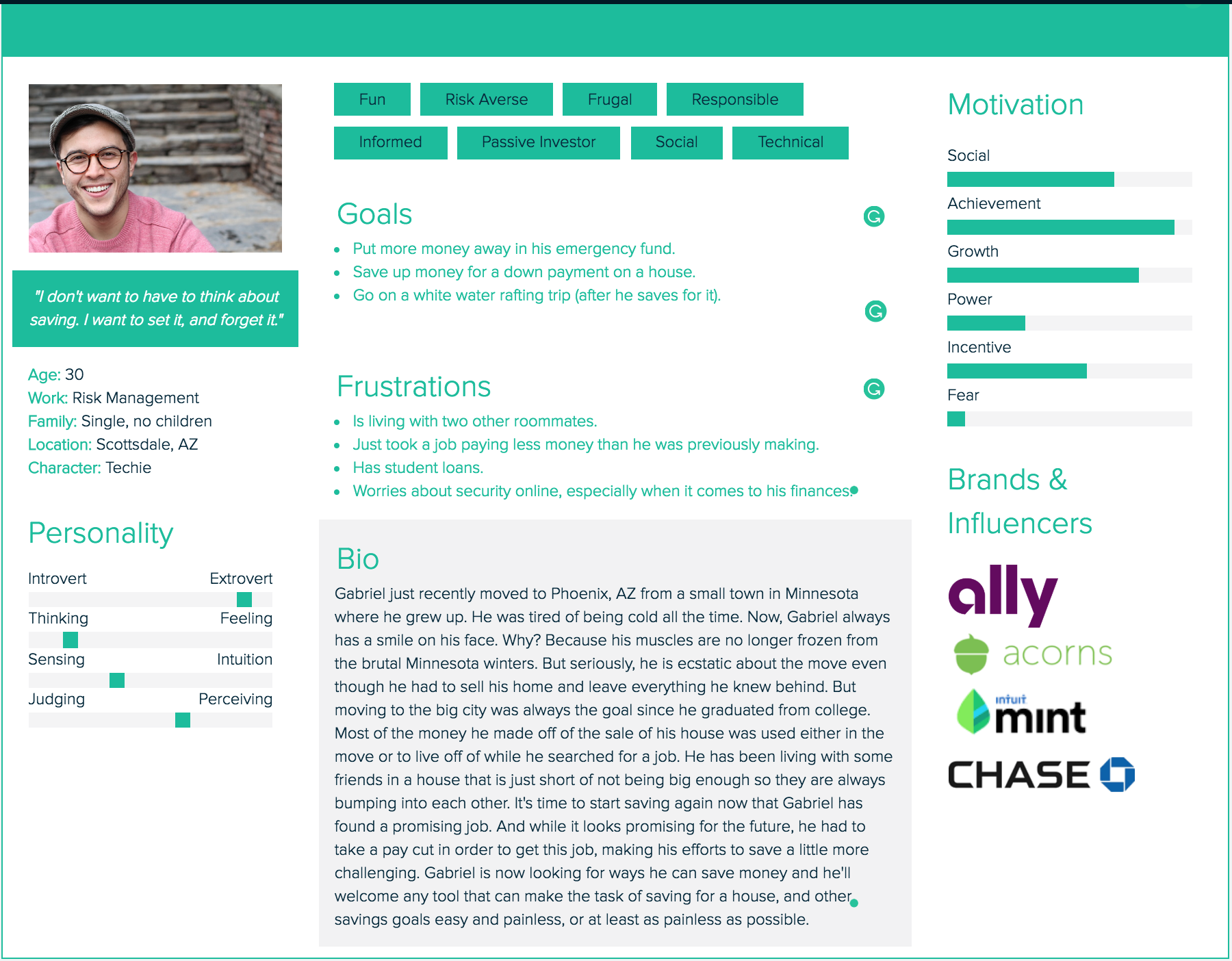 There are three task flows : One for a user to create a new goal, another for modifying an existing goal, and finally one where the user could transfer funds once the goal was set up. A task flow demonstrates the beginning to end walk through the process with no deviations.
View the full task flow. 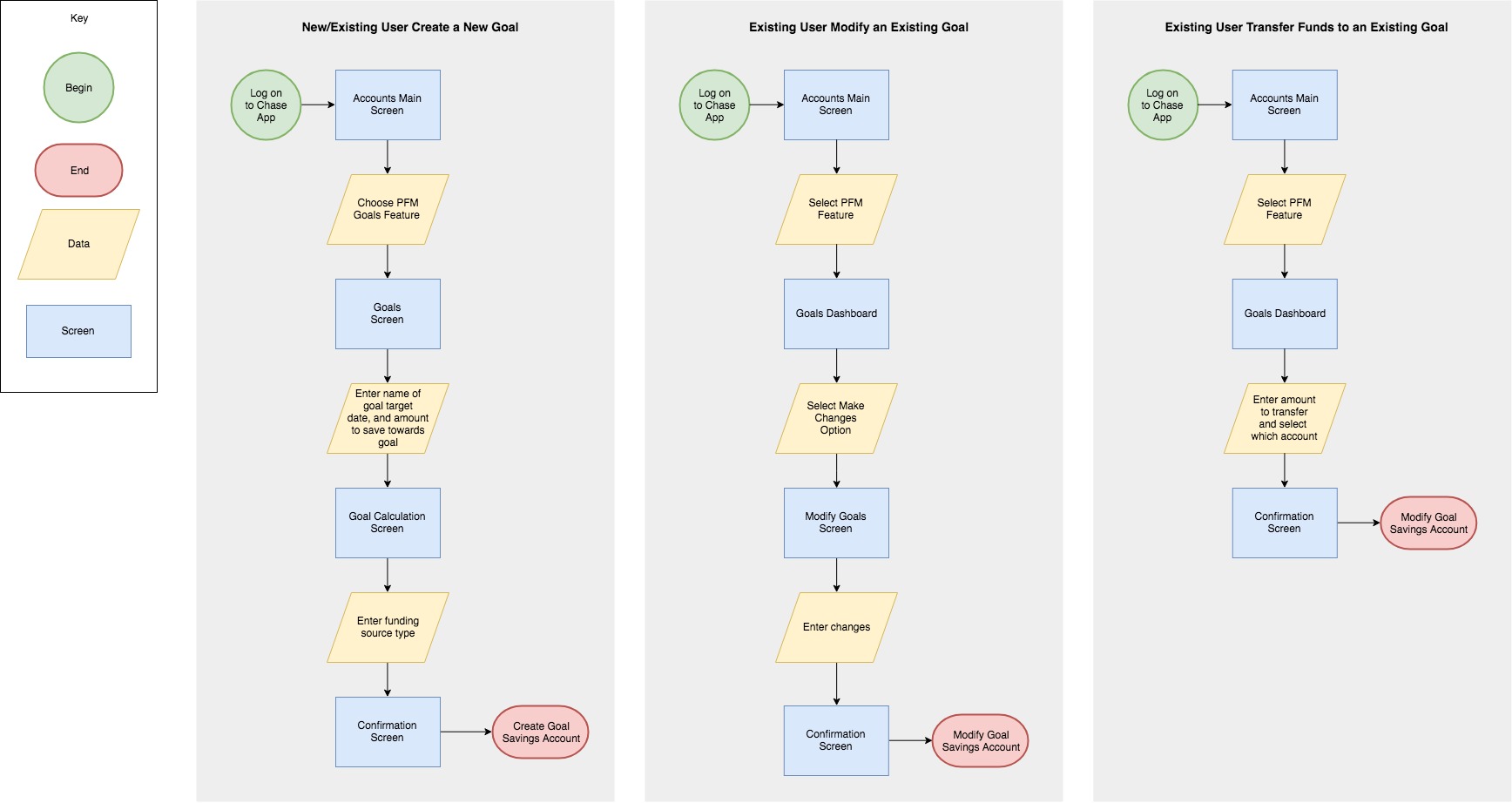 Here is where I got to get into the head of Gabriel, my persona, and really look at what a real user might decide to do along the path to creating his goal. There are many decision points to consider, like is he creating a new goal or modifying one that already exists. He also needs to take into consideration how the goal will be funded. The user flow is like a task flow but takes decision points into consideration, which may take the user into other directions along the flow. View the full user flow. 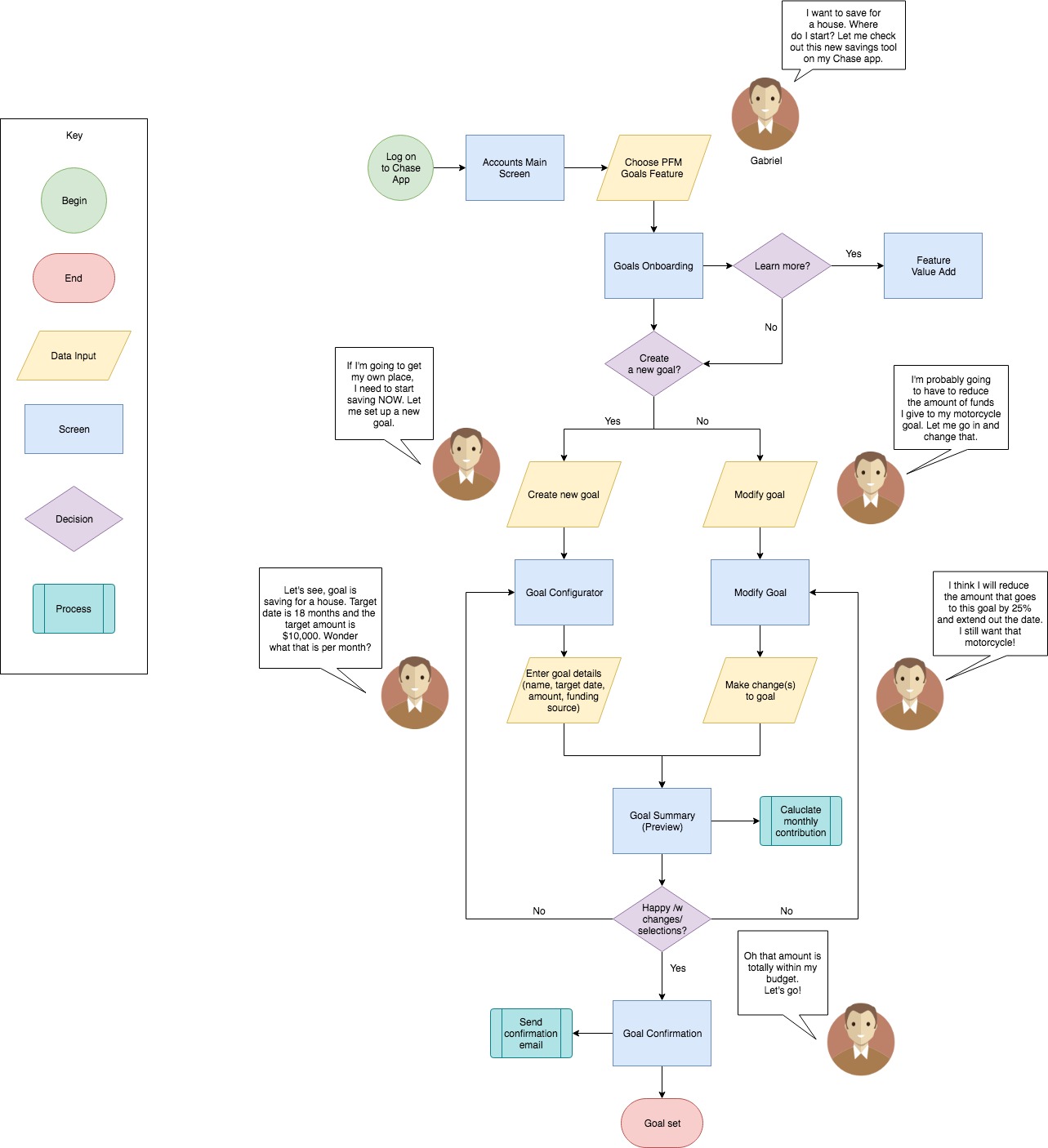 I used both my task flow and user flow to start sketching some low-fi wireframes. This sketch represents the creation of a new goal with a second step of editing the goal once it's created. Getting the ideas rapidly down on paper really helped to solidify the flow. I find this method the best way for getting ideas down quickly and being able to iterate on them just as quickly. View the full sketch.

Once I got the low-fi sketches to where I wanted them, I began creating the high-fidelity wireframe/prototype inside of Sketch. Here, is where the UI starts to come together and I was careful to stay within the parameters of the already established branding of the Chase app. I wanted to be sure I stuck to the original task of making sure the new tool embedded well and smoothly with the rest of the app.
Interact with the prototype.

From the affinity map I was able to pin point a couple of distinct patterns. There were some users who had difficulty with a few of the elements on the Edit Goal screen. There was also clearly some confusion around the Funding Screen and the fact that the Continue button seemed grayed out to people. Between the patterns that emerged and users' suggestions, I was able to prioritize which changes I needed to make. In this case, making sure the Funding screen can be more easily understood takes priority because that page was impeding people from moving forward. View the affinity map.

I determined that most of the suggestions for change that came from users and the patterns found in the affinity map were simple enough to implement. Had there been a significant amount of changes that needed to take place, I would have used a priority matrix to pin point exactly which changes were low effort/high impact and implement them. 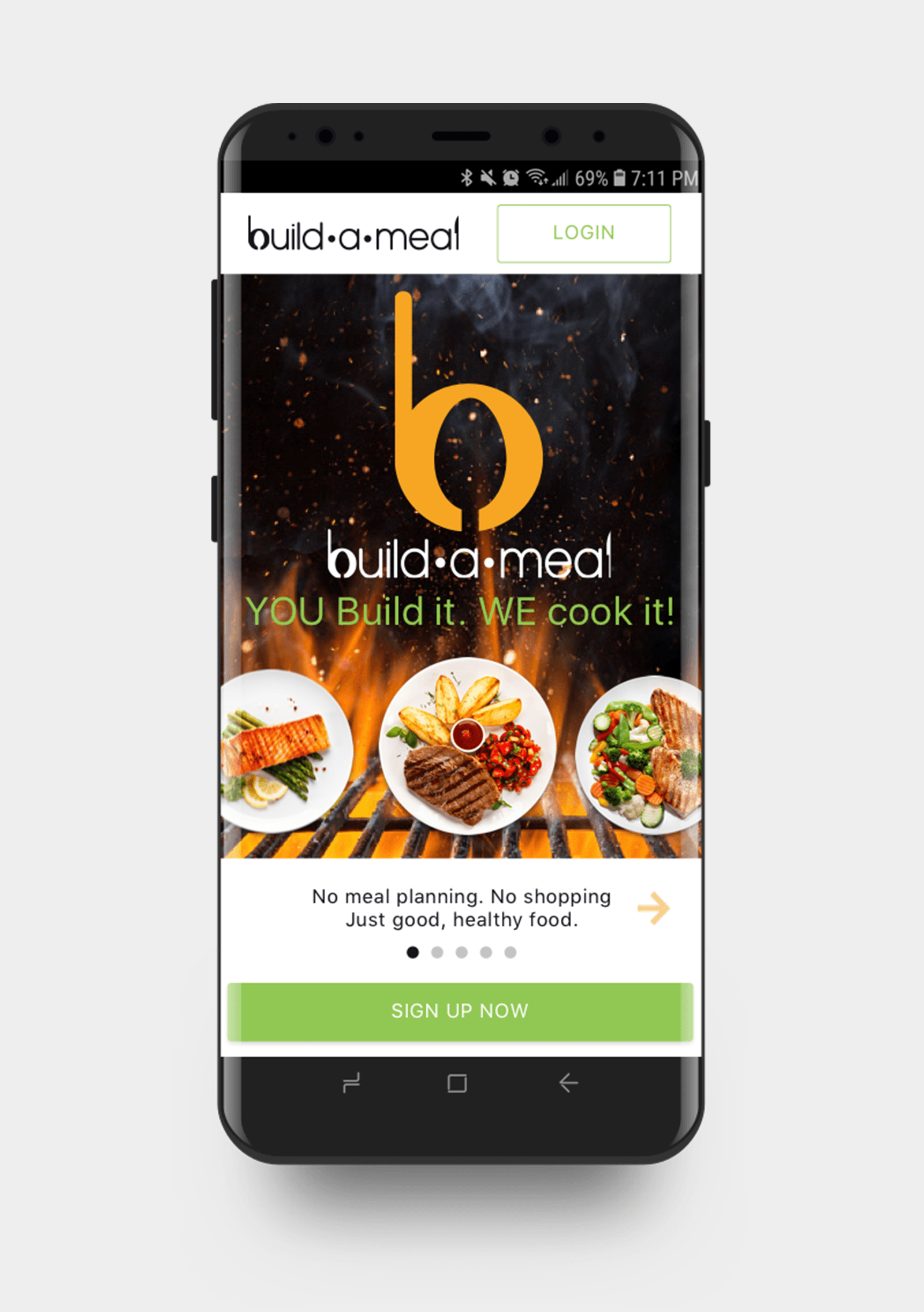 Whether it's a UX or LX project I have the breadth and depth of experience to bring it to life. Hire me for contract, freelance, or full time hire. Let's work together on YOUR next project!